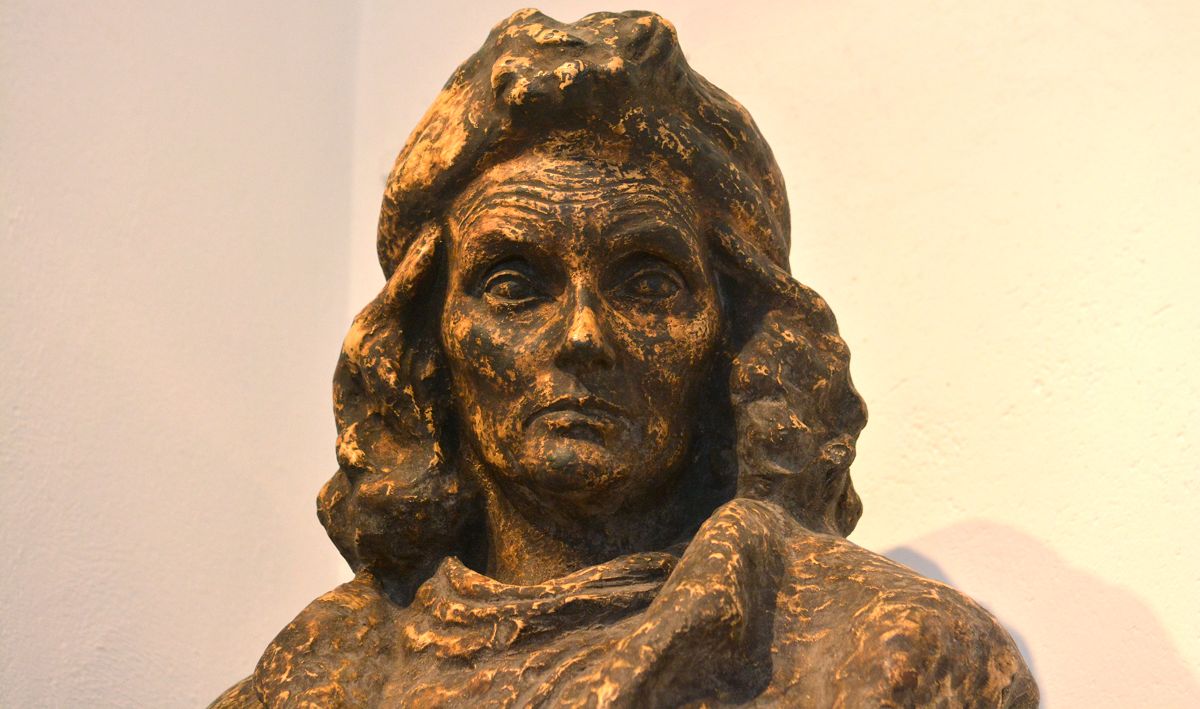 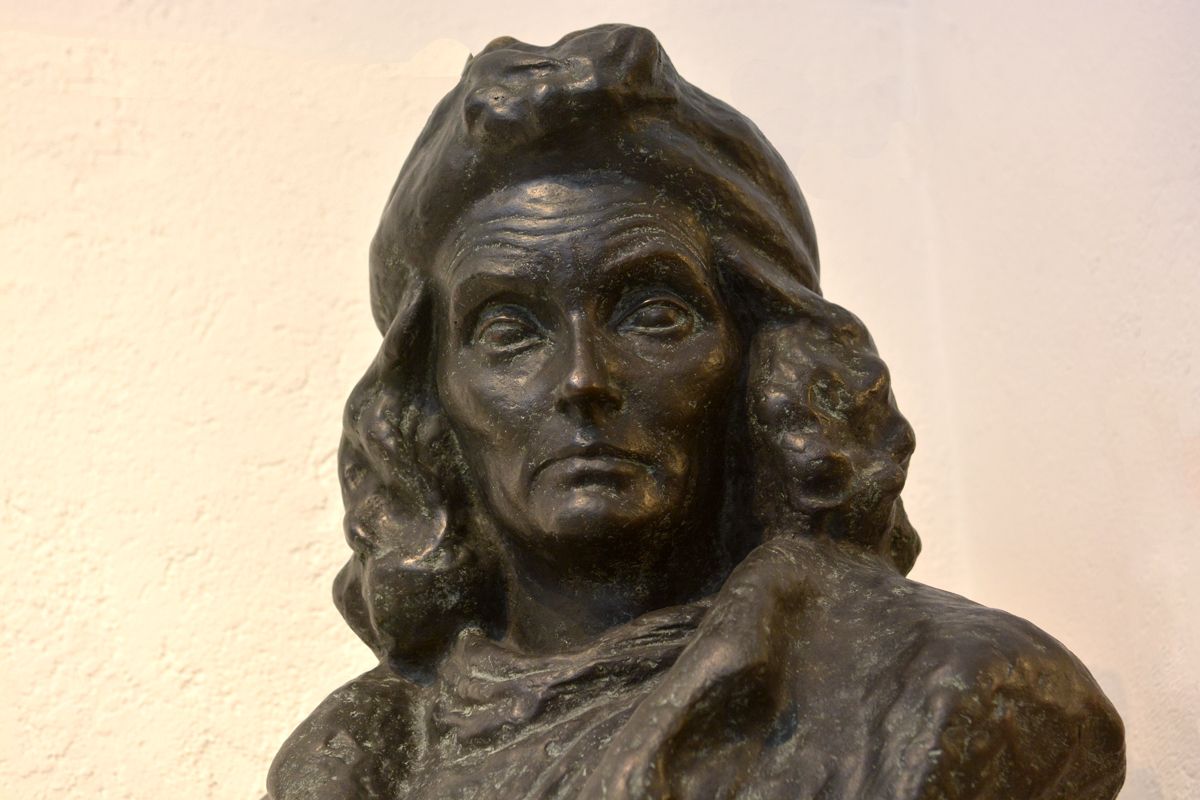 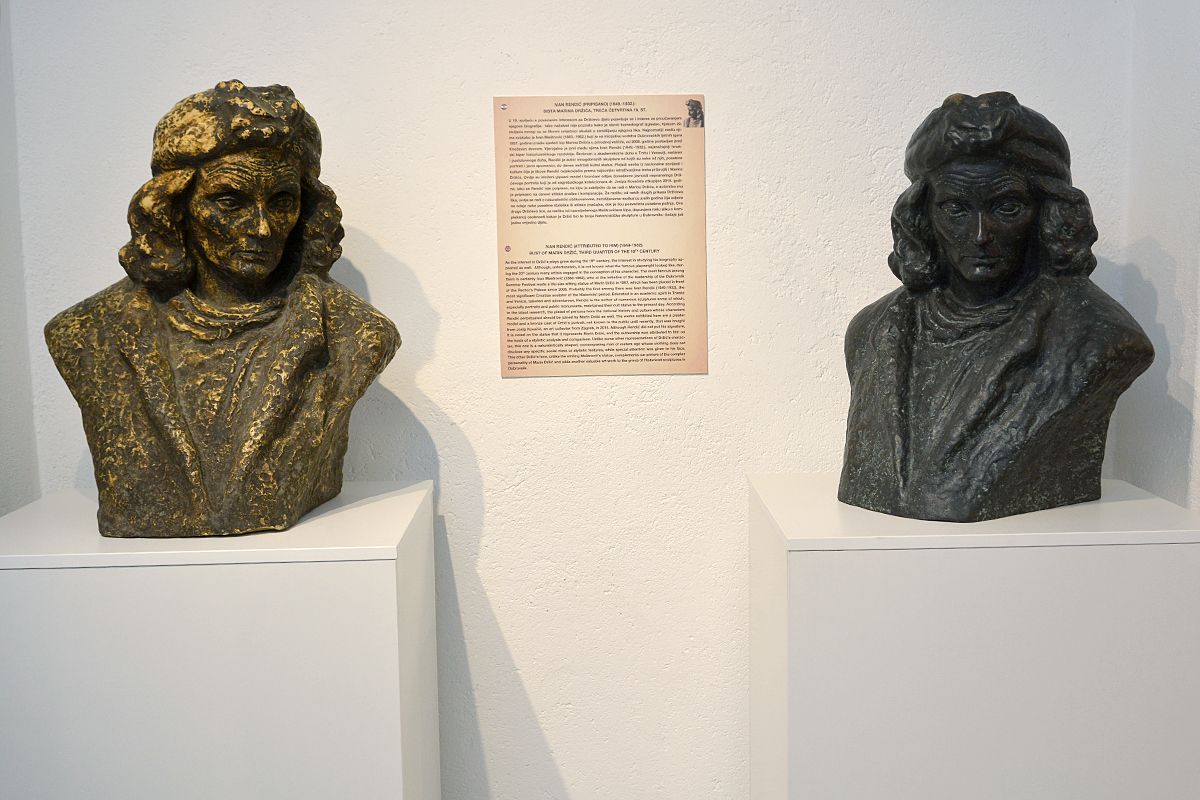 Marin Držić was born in Dubrovnik, probably in 1508, in a family house near the Rector’s Palace, as the youngest son of a family of ordinary citizens, originally from Kotor. The family had lost its peerage in the 14th century because of an illegitimate son. His mother, Anukla, came from a distinguished middle-class family Kotruljević. By custom, not belonging to nobility, members of the Držić family had no right to take part in the administrative bodies of Dubrovnik. However, the family retained the title of protectorate (“patronage”) from earlier times. The patronage was passed down to Marin, a student of divinity, for the church of All Saints (Svi sveti), later named Domino, and the church of St. Peter (sv. Petar) on the island of Koločep. This, as in the case of the another rector, Nikola Gozze, entitled him to revenue from the land owned by the church, similar to the one in Rijeka Dubrovačka. The first prominent member of the Držić family, Džore, a poet and a pioneer of the local drama expression, was a brother of the senior Marin, our Marin’s father.

Džore perished, together with some hundred others, in the gunpowder explosion at the arsenal of the Rector’s Palace, on 8th August 1563. Marin Držić had a brother, a popular painter, Vlaho. The first written record of Marin’s financial problems, a life-long predicament, in spite of his church revenues and his mother’s dowry, dates from 1536. It concerned a dispute with the abbesses of St Andrew’s (sv. Andrija) nunnery, in which the accused debtor was a lodger. The Senate (Vijeće umoljenih) appointed Marin Držić, a student of divinity since 1526, to the post of the organist at the Dubrovnik Cathedral in 1538. In August of the same year he was granted financial aid to study at the University of Sienna in Tuscany. In the year 1541 Držić was elected the Head of the Student hostel with a mandate of one year, the position that brought with it the title of the vice-rector of the University of Sienna. The investigation into a banned performance of a comic play in 1542 in which he took part as an actor, and maybe the author as well, punished him only mildly. He did not complete his studies, but he still received a wide education. Držić returned to Dubrovnik at the beginning of 1545, via Ancona, where he can be traced in 1543. A record shows that the Senate appointed him to the post of a clerk in the wool exchange to replace his brother Vlaho. At the end of that same year he met an Austrian count, Christoph von Rogendorf whom he accompanied as his valet to Vienna. After his return to Dubrovnik in 1546, Držić travelled again with the count, acting as his interpreter, this time to Constantinople (Istanbul). Following a political dispute with the young Buccio, whose father Miho had earlier been expelled from Dubrovnik, Držić returned to Dubrovnik at the beginning of 1547 and submitted his report to the Minor Council (Consilium Minor). Taking into account the people associated with those events it is possible to conclude that his travels had a political mission behind them.

Držić became a deacon in Dubrovnik in 1548 and his plays date from that time. His comedy Pomet, nowadays lost, was performed by a theatre troupe in the venue in front of the Rector’s Palace. On 17th April of the same year, Držić, nicknamed Vidra (Otter), accused Vlaho Kanjica of attacking and hitting him on the head with a piece of wood. On hearing the evidence of witnesses the attacker was sentenced. During the next Carnival time, in 1549, the pastoral play Tirena was staged, but the performance had to be cancelled due to the cold and the wind. When Držić was accused of plagiarising Mavro Vetranović, the poet himself defended him. As far as we know, Držić was first mentioned as a priest, (prezbiter), in 1550. He entertained the wedding party of Marolica Zamagna with his farce Novela od Stanca, in the same year. At Vlaho Držić’s wedding party Tirena, a mythological play in verse, as well as Venus and Adonis (a story of how Venus, the goddess, fell in love with the handsome Adonis, put into a comedy) was performed. This comedy was published in a book in Venice in 1551, the only one published in his lifetime. A book of love poetry Pjesni Marina Držića ujedno stavljene s mnozim druzim lijepim stvarmi, together with Tirena and Novela od Stanca (Poems by Marin Držić put together with many other nice things, including Tirena and the Tale of Stanac). No original copy has been preserved, but two identical editions followed during the 17th century, in 1607 and 1630. However, his work on plays with critical overtones, remained in the manuscript. The Pomet troupe performed the comedy Dundo Maroje in the City Hall during the Carnival in 1551. A promissory note from the same year shows that Držić was in debt to his friend Marin Šumičić. The following year, 1552, Pjerin, preserved only in fragments, was performed by Garzarija troupe at the wedding of Đono Miškinov. The same troupe performed Džuho Krpeta at the wedding of Rafo Gozze in the carnival year 1554, the same year when, in June, Držić accused Ivan Dračevica of slander. There are no precise records of the performance of the wedding pastoral Tripče de Utolče (also known as Manda) nor of Arkulin, the works that have not been preserved in full, like Džuho Krpeta. Držić was appointed clerk in the salt exchange, a position usually held by priests. Njarnjas troupe, according to the inscription, performed the comedy Skup at the wedding of Sabo Gajčina in 1555.

The following year, 1556, Držić refused the same appointment of a clerk. In spring of the same year Grižula (or Plakir) was played at the wedding of Vlaho Sorgo. Due to the fear that it may disturb the public, the authorities banned the performance of Hecuba in 1558, but it was played at the beginning of the following year by Bizzaro troupe. Držić moved to Venice in December 1562, and is mentioned as the curate to the Venetian archbishop in 1563.In that city of lagoons he kept company with a rich tradesman Pero Primović. A record of his statement shows that he was a witness in the case of Primović brothers against Pero’s servant. He paid a short visit to Dubrovnik that same year, and according to a tax document he spent some time in the city in August 1554. Držić proclaimed his conspiracy undertaking, a pro-Spanish subversion plan in five letters against the Dubrovnik authorities, while in Florence. He wrote to the ruler of Tuscany called the Great, Duke Cosimo I, and his son, Prince Francesco. The plan did not get support. According to the genealogy of the Držić family, compiled by his younger cousin, Jere Držić, son of Marin’s brother Vlaho, Marin Držić died in Venice on 2nd May 1567 and was buried in the common grave of the basilica of Saint John and Paul.